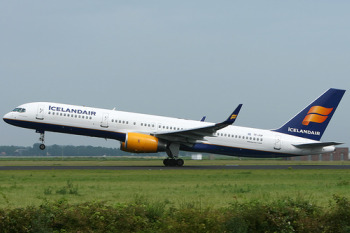 For centuries, Iceland’s remote location made life there very difficult for early settlers. It also kept the island country relatively undiscovered, and it’s really only in recent years that is has become a popular tourist destination. Part of the reason for that is because to this day, hundreds of years after Ingólfur Arnarson first sailed to Iceland, the country is still relatively inaccessible. Flying has made much easier to get to but it’s still a very expensive journey.

Airlines that fly to Iceland
Long gone are the days when most commercial jets landed in Reykjavik to refuel on their way to Europe. Only two airlines currently offer flights to Iceland year round (a few small European carriers offer flights in summer), which means they can (and do) charge pretty much whatever they want. The good news is that they want tourists to come to visit Iceland, and that seems to keep flight prices from being exorbitantly high, though they are by no means inexpensive.

Icelandair, the country’s first air carrier, has recently gotten some competition from low-cost carrier Iceland Express, which extended its service to the US (Newark) in summer of 2010, and recently announced new nonstop service from Chicago starting in June of 2011. Whether than competition will result in lower prices remains to be seen. Icelandair does, however, offer some competitive fares to cities in Europe from the US, and they offer free stop-overs in Iceland along the way. So if you are planning a trip to another European city served by the airline, consider stopping over in Iceland along the way.

Flights from the US and Canada to Iceland
Many people are surprised by how short the flight from the US to Iceland is, particularly if you fly from NYC or Boston. The flight from one of these cities to Reykjavik is just under 5 hours, about the same distance as the flight from New York to California. Icelandair offers flights to Reykjavik from Seattle, Minneapolis-St. Paul, Boston, New York (JFK), Orlando, Toronto and Halifax, and has just announced flights from DC starting in May of 2011. At this point, Iceland Express only serves one US airport – Newark Liberty in New Jersey – and one in Winnipeg, Canada, but service from Chicago will begin in the summer of 2011. If you’re coming from any other city in the US or Canada, you’ll need to connect in one of these hubs.

Flights from anywhere else
There are no direct flights to Iceland from Central and South America, Mexico, the Caribbean, India, Asia or Africa. To get to Iceland from one of these countries or continents, you’ll need to first fly to a city in Europe, Canada or the US and connect from there.