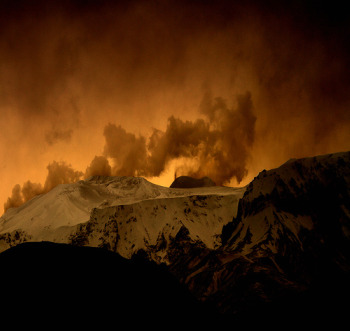 Iceland sits at the meeting point of the American and Eurasian continental plates, along the geologically active mid-Atlantic ridge. The location is a hotspot for volcanoes, and Iceland is home to nearly 130, though only 40 or so have erupted in the last 1000  years. Hekla is one of the most active in the world, erupting roughly every ten years. It’s by no means the only active volcano though. Eyjafjallajökull erupted in March, 2010, and then again in April, shutting down air travel that had to go around its giant plume of ash.

Still unpronounceable to most people, the name Eyjafjallajökull is now know to most travelers, because it is the name of the volcano that has been causing so much trouble to air traffic over Europe. Thousands of flights have been canceled and some airports still remain shut down because it it too dangerous to fly through an ash cloud. The airline industry is reportedly loosing about $200 million per day, and hundreds of thousands of passengers have been left stranded.

Of course, getting stuck at the airport, however unpleasant and expensive the experience might be, doesn’t quite compare to being showered by volcanic ash or having the road to your home washed out by powerful floods. While most of the population is safe in Reykjavik (2/3 of the people live there), there are others who are suffering at the hands of the volcano, as melting glacier water floods the countryside and ash rains down from above.

>> more about tours of Eyjafjallajokull

>> more about the Eyjafjallajokul April eruption

>> photos of the Eyjafallajokul April eruption

>> the best jokes about the Eyjafallajokul eruption

>> should you visit Iceland during the eruption?

Hakla is the most active volcano in Iceland and erupts every ten years or so. The last time was in 2000, so if history is any indication, she’s about ready to blow again. Despite a Twitter rumor that she had begun erupting (posted on April 19), so far she has remained quiet.

The Lake eruption of the late 1700’s was one of the worst in Iceland. For 8 months from 1783 to 1784, Laki belched out lava and poisnonous gases that killed nearly half of the country’s livestock. The resulting famine then killed off about 25% of the Icelandic people and the poisonous haze that spread across Europe killed thousands there as well. In both Europe and North America, extremely cold winters were reported. In the US, the Mississippi River even froze at New Orleans.

Despite the destruction wreaked by Laki in the late 18th century, Katla is considered to be an even more dangerous volcano. Only 16 eruptions of Katla has been documents in the last 1000 years, with the last being around 1918. The most destructive was the eruption of 1755, which caused massive flood that carried more water than the Amazon, Mississippi, Nile, Yangtze rivers combined.

In the past, an Eyjafjallajökull eruption has been followed by an eruption at Katla, so geologists are watching the volcano carefully. However at this point, there have been no indications of an impending eruption.

Grímsvötn, located in the southeast of Iceland near Vatnajökull glacier, erupted in May 2011, briefly closing down the international airport in Iceland and clouding the skies near the volcano as it rained down ash in the surrounding area. There’s not likely to be much permanent damage and travel to Iceland, particularly in Reykjavik, is largely unaffected.