How to Visit Greenland from Iceland 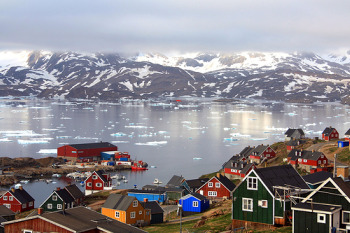 Though Iceland is only five hours from New York City and about three hours from London by plane, many people still think of it as being very far away from the rest of the world. In order to make the most of the long journey to visit Iceland, some tourists combine the trip with a visit to nearby Greenland.

The world’s largest island, 80% of Greenland is composed of ice, and it is home to only 55,000 people, making it the country with the lowest population density in the world. Greenland, which is the size of Mexico is part of the Kingdom of Denmark, though it has been self governing since 1979. The native Inuit live much as they did hundreds of year ago, managing a living from sea, and battling against the severe cold and ice.

How to get there

Only two airlines serve Greenland: Air Greenland, which offers flights from Copenhagen to Kangerlussuaq or Narsarsuaq several times per week, and Air Iceland which operates flights from Reykjavik to several cities in Greenland all year round.

If you are coming from Iceland you have the option of making an extended stay in Greenland, or simply coming for a day trip. Depending on your destination in Greenland – Nuuk, Ammassalik, Kulusuk, or Narsarsuaq – the flight ranges from 2-3 hours.

The flight from Iceland to Greenland isn’t cheap. Expect to pay anywhere from $250-$500 round trip, per person depending on time of year, how early you book, and the class of ticket. For this reason, many people choose to opt for an organized tour through Air Iceland, which cost only slightly more – 450-500 euros per person – and include guided tours and activities. Two night packages that include hotels and meals cost about 1000 euros per person.

Air Iceland operates day tours in summer – May to September – only. Overnight trips are available year round; flights run all year long so you can go also go independently anytime, but it will be quite cold in winter and weather delays are common.