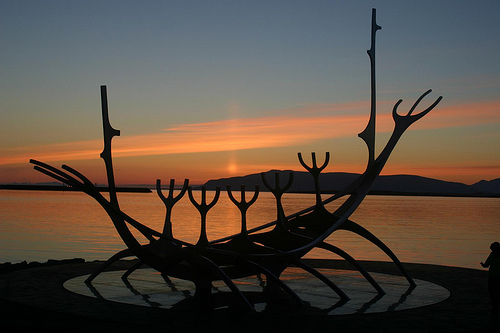 Iceland’s peak tourist season is short but sweet. It starts in mid-June and goes to early September, with most visitors coming from late June to August. During this time, the weather is warm – ranging from 6-13°C (about 46-56°F) with even warmer days possible. Summer is the time of the Midnight Sun, when Reykjavik has only a few hours of darkness each night and areas further north barely see the sun set. In June, the sun rises at an average time of 2:42am and sets  at 11:32pm, making for long days of exploring the beautiful countryside or partying in the streets of Reykjavik. By August though, while days remain long, the sun begins to rise and set at more normal hours.

Hard to reach areas, particularly those in the rugged interior, are fully accessible and all highland roads and mountain huts are open (by July). Whales and puffins can be spotted along the coast, and there are plentiful tours and  outdoor activities to choose from. You can go horseback riding, glacier-walking, caving, hiking, and  snorkeling, and it’s possible to camp outdoors and still be comfortable. You’ll still want to bring a warm jacket and good boots and dress in layers for fluctuating temperatures, but overall the weather is quite pleasant for our door adventure.

Of course, there are some downsides to visiting Iceland in peak season. Prices for flights to Iceland will cost much more in summer than during any other time. While you might be able to fly to Iceland from the US for as little as $400 in November or March, a flight will cost at least $700 (and possibly more) during the summer. And that’s not all. Hotels, car rentals and some tour companies also charge high season rates during this time, so your activities and lodging will cost more as well. You’ll also have more crowds to contend with at major attractions like the Blue Lagoon and Golden Circle.

On the upside, there’s so much to see and do – indoors and out – in Iceland in the summer. Because it is peak season, many attractions that close during the quiet winter are fully open in summer. There are also dozens of festivals and special days in Iceland during the summer. In June, there’s the Icelandic Independence Day. In August, you can celebrate Reykjavik’s Gay Pride festival, the Reykjavik Marathon, the Reykjavik Jazz Festival and the Icelandic version of Labor Day.