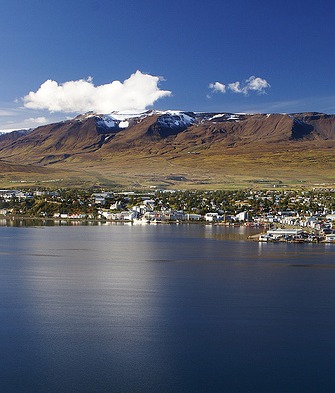 Often referred to as the Capital of North Iceland, Akureyri is Iceland’s second-largest city, with a population of 17000 people. Its ice-free harbor and mild climate led to it being an important center of trade in early years; now it’s home to University of Akureyri, giving the town a very youthful feel. Akureyri is an excellent base for exploring the northern part of Iceland, especially for those who prefer to stay in a more urban environment and who want to be able to easily walk form their hotel to bars and restaurants.

Attractions in North Iceland include the Myvatn Nature Baths, Godafoss waterfall, Lake Myvatn, Krafla volcano, and the town of Husavik, the whale-watching capital of Iceland (and the world). Additionally, it’s easy to arrange for horseback riding, paragliding, winter skiing, and summer golfing. On a longer day trip (in summer) one can also visit the mighty Dettifoss waterfall or the Askja caldera in the interior. Several companies like Saga Travel offer day trips around the area from Akureyri and Myvatn.

In the town, you can rent bikes, visit the beautiful botanical gardens, which contain every plant found in Iceland, visit the many art galleries and museums in town,  or relax at one of the local swimming pools.

My suggested itinerary for the area is three days: one day to arrive and explore the town, one to go horseback riding or whale-watching in Húsavík, and one day to drive around the area and visit Godafoss, Lake Myvatn and the Myvatn Nature baths, or to schedule a day trip into the interior to visit Dettifoss and Askja. If you have extra time, you could also go skiing or golfing depending on the season, hike along the many nearby trails, visit Hrisey Island or take a short flight to Grimsey. There are also countless nearby small towns to explore, ranging in population from just 80 to about 2600. 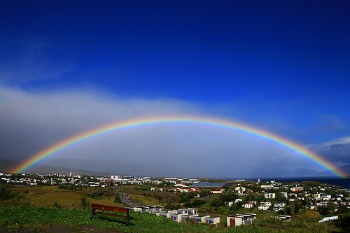 Akureyri offers more accommodation choices than you’ll find elsewhere in Iceland, with the exception of Reykjavik. Stay in town at a hotel, hostel, guesthouse, or apartment, or venture a bit further out of the city for a farmstay or rural guesthouse accommodation.

The number of restaurant options offered in Akureyri is surpassed only by the number in Reykjavik. No where else in Iceland will you find such a variety of cuisines, atmospheres and price-points, from quick and casual to haute cuisine.  Grab a pizza or burger in one of the oldest buildings in town at Bautinn, try lobster soup, sandwiches, fresh fish, and burgers at Greifinn, one of the city’s most popular places to dine,  or sample Icelandic specialties with an upscale twist at Strikid.

Given that it’s a college town, it’s no surprise that Akureyri also has a vibrant nightlife scene. Many places that are cafes by day become happening clubs at night.  Check out Kaffi Akureyri for one.

Getting there and around:

Once in Akureyir, it’s easy to get around the town on foot or via the free public bus. Getting there from Reykjavik is pretty straight-forward as well. Just take the Ring Road, which should take you 5-7 hours, depending on how many times you stop. You could also take a 45-minute flight from Reykjavik.

>> more on getting from Reykjavik to Akureyri