The Phallological Museum in Husavik 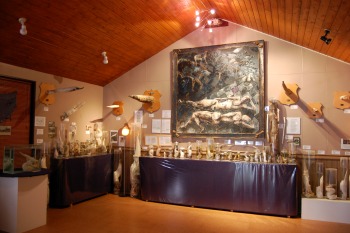 In addition to being the whale-watching capital of Iceland (and the world), the small town of Húsavík has a unique claim to fame. The town is the home of the Iceland Phallological Museum, which, as you might guess, is indeed a museum devoted entirely to penises. Upon hearing this, and reading that the museum had the distinction of containing one specimen from every species of animal found in Iceland, I decided I had to visit while in town. If the museum’s 11,000 visitors in 2009 are any indication, you are probably thinking the same thing. Let me save you the trouble.

The museums collection’s contains two hundred and nine penises (and “penile parts”) from 46 different land and sea animals in Iceland.  There are 55 whale specimens, one from a rogue polar bear, 35 from seals and walruses and over 100 more from 20 other kinds of land mammals.  Additionally, there are 40 specimens from foreign animals….and there are even four “promised” specimens that will come from humans, once the people attached to them have been deceased.The first of these human donations arrived in 2011.

Displayed among and around the various penis specimens – which themselves are dried and mounted on the wall  or submerged in jars of formaldehyde – are “artistic” and practical odds and ends related to the penis, which range from penis coffee mugs and ashtrays to penis art and photos.

Despite the mass quantity of artifacts housed in the museum, the building itself is quite small – just two rooms. Even if it wasn’t possible to walk around the entire place in under 20 minutes, you’d probably want to (or at least I wanted to) leave after that amount of time. To put it bluntly: that amount of penis in one room is slightly unnerving. The massive whale and elephant penises mounted on the walls are interesting, but one can only look at so many long coils of penile tissue in a jar of greenish liquid before feeling slightly ill.

Verdict: If you’re in town and have some time to kill, by all means, stop by. But I wouldn’t recommend going out of your way to visit the museum.

The museum is open from noon to 6 pm daily from May 20 to September 10; winter group bookings can be made by appointment. Admission is 600 ISK (about $6 US). The museum is located on Husavik’s main road, right by the harbor, just past the Whale Museum.