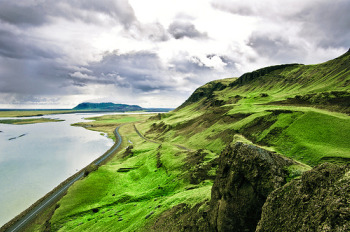 Iceland is the land of “fire and ice” but it’s also so much more. It’s a land of waterfalls, of geysers, of earthquakes and volcanoes, of midnight suns and swirling Northern Lights, of hot springs and Blue Lagoons, and magical horses, and maybe even mythical elves. A trip to Iceland is one of adventure and the discovery of these beautiful natural sights.

Iceland’s position on the mid-Atlantic ridge, right over a volcanic hotspot, results in a large number of volcanic mountains on the island. In fact, there are over 130, though only about 40 have erupted in the last 1000 or so years. While Hekla is one of the most active in the world,  Eyjafjallajökull erupted in March, 2010, and became a huge draw for tourists, though it has since stopped and second eruption began, this time spewing ash into the air and disrupting air travel across Europe.

Because of the volcanic activity in the region, Iceland is also crisscrossed with thousands of caves, tubes that once carried hot lava underground.  The volcanoes also contribute to the black sand (actually bits of volcanic rock and ash) beaches that line the coast, especially in the south near Vik.

>> more on volcanoes in Iceland

You can hardly drive more than a few miles without seeing a waterfall in the distance. Gulfoss, on the Golden Circle route, is one of the most famous and most-visited. It plunges over 100 feet from the top of the canyon to the river below. Seljalandsfoss, also in the southwest of Iceland, drops even farther, at over 200 feet. It’s not as immediately impressive as as Gulfoss, but it is unique in that you can actually walk behind it. Europe’s largest waterfall, Dettifoss, is in the north of country, near Myvatn.

One of Iceland’s most beautiful sights can be its most elusive.  The Aurora Borealis, or Northern Lights, are only visible during very specific conditions. The Iceland Meteorological Office rates the chances of seeing them each night based on weather and solar patterns, but sightings are never guaranteed.

11% of Iceland’s landscape is covered by glaciers – 8% of which is covered by a single glacier, called Vatnajökull, located in the barren interior. The best way to see it is with a licensed guide, who will provide the necessary gear, and help you stay safe while you explore the ice.