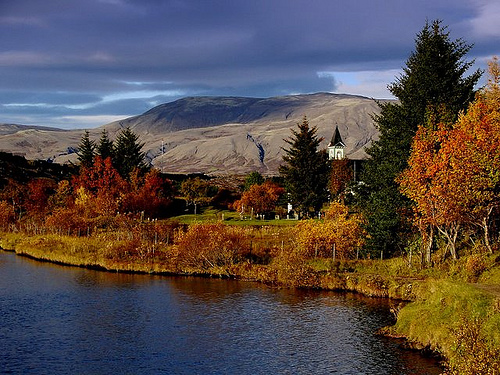 September deserves to be a more popular time to visit Iceland. Though you’ll miss out on seeing the sun high in the sky well past 10pm (sunset is around 7:30pm and the sun rises around 6:30am), temperatures are still quite nice, with average temps between 10.1°C (50 °F) and 5°C  (41 °F) throughout the month, and prices are lower and crowds are fewer.

However, if you come at the beginning of September, you’ll find the temperatures on the higher end of the scale, as warm as 55-60 °F.   As the month goes on it gets colder, but you’ll still find the weather fairly pleasant overall.

The good news about traveling to Iceland in September – particularly early in the month – is that while the weather is still nice, it is considered off season and so you’ll find prices considerably lower than just a week or two earlier. While prices on  flights to Iceland during summer can be $700-$1000 from the US, in September you may be able to find flights for as low as $500-$600 round trip. Most hotels and tour companies switch to low-season rates at the beginning of September as well.

September visitors can enjoy many of the same outdoor activities popular in summer, including  horseback riding, glacier-walking, caving, hiking,   snorkeling, and whale watching (though the rate of sightings decreases in September). Harder to reach places like the interior and remote areas of the Westfjords are often inaccessible by early September, but instead you can watch (or take part in) an important fall ritual in Iceland – the livestock round up. You also have a good chance of seeing the Northern Lights this month.

You’ll want to bring warm clothes for outdoor activities in Iceland this month. A warm, waterproof jacket, hat and gloves,  and good boots are essential. Beyond that, most outfitters provide you with the proper gear for your adventures.

>> more on what to wear in Iceland in fall

The Rettir Sheep and Horse Round-Up is one of the main events of September. During this month, farmers round up free-roaming sheep and horses for the winter and many farms invite guests to participate. The dates vary by region and most round ups and their accompanying festivals last about a week. The Reykjavik Film Festival is also held at the end of September and features films from around the world.