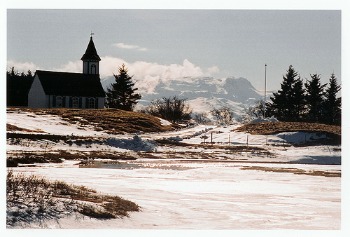 While March might signify the start of spring in many places, in Iceland, it still feels like winter. The temperatures, on average, are only an insignificant degree warmer than those in February, ranging from -2  to 3.2°C, though you may luck out and get some warmer days on your trip. Snowstorms are as common as sunny days and many roads in outside of the capital area are impassible without a 4wd vehicle (though you can safely drive yourself around the Golden Circle in a compact). The hours of daylight greatly increase over the course of the month though, to about 12 hours per day. Sunrise is generally around 7am and the sun sets again by about 7pm. For those who want to visit during off season to take advantage of deals but still want to be able to enjoy long days, March is an ideal time to visit.

Visitors in March may be surprised by the number of things to do in Iceland in winter including horseback riding, glacier-walking, caving, snorkeling, doglsedding, and hunting for the Northern Lights, which are best seen from October to March. Roads in southwest Iceland are open and often clear, making it easy to get around on your own, and though it certainly be cold, those coming from the northern US may find it the same temperature (or even slightly warmer) than at home.

March is still off-season and tourists who visit during the month will notice significant discounts (sometimes as much as 50% off) on accommodations and some tours. Flights are also significantly cheaper in March. While summer peak season fares can be as much as $700-$1000 from the east coast of the US, March deals on flights to Iceland, can be as low as $350 round trip.

March is one of the most festive times of yer to visit with several holidays and events taking place during the month. The first is celebrated on March 1 and commemorates Iceland’s repeal of its 75-year ban on beer, which was repealed on March 1st, 1989. In Reykjavik and many towns around Iceland, the event is celebrated with lots of drinking and pub crawls.

Other holidays center around Lent, or more specifically, the few days before Lent, when everyone tries to cram in as much indulgence as possible before the season of reflection and solemnity. Two days before Lent, Icelanders celebrate Bolludagur or “Buns Day” – a day when children wake up early and try to playfully “beat” their parents out of bed in exchange for the reward of cream-filled buns. The next day is Sprengidagur or “Bursting Day” a day to eat a traditional stew-like meal (until the  point of bursting) as a final hurrah before Lent.

For foodies, the Iceland Food & Fun Festival is generally held in early March (or late February) as well.  During the week-long event, chefs from around the world come to work in Reykjavik restaurants, which serve special menus.