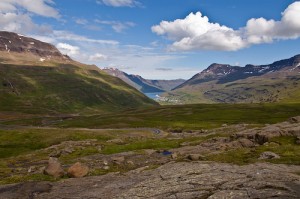 Summers in Iceland are beautiful, and June is one of the most popular times to visit. Summer here is like few places on earth. For one, while it gets quite warm in Iceland in summer, it never really gets hot. Temperatures generally range between 6 and 13°C (42 and 55 °C) but it can get up to as high as 65°F on occasion, with temperatures in July and August generally slightly warmer than June. June is one of the driest months, so though Reykjavik is often more volatile and rainy, it’s your best chance for the most dry days.

One of the major draws of June is the nearly endless hours of sunlight you’ll experience. Sunrise and sunset hours shift through the month, but the average is sunrise at 2:42am and sunset at 11:32pm. Further north, the amount of sunlight increase, with the sun barely setting before it’s back in the sky.

As June is one of the most popular months to visit Iceland, it’s also the most expensive. Prices for flights to Iceland cost more in June than they do in April or May, and you’ll be hard pressed to find anything less than $600-700 round trip, from the US. You’re more likely to see prices as high as $800-$1000. High season rates will be in effect at hotels and car rental desks as well.

The reason so many people visit in June (as well as July and August) is that the full range  outdoor activities are available nearly 24 hours a day. You can hike at 10pm under the shining sun, go horseback riding in broad daylight at 5am,or drive nearly all night but never in darkness. Hard to get to areas like Hornstrandir in the Westfjords, and the barren interior begin to open up, and puffins and whales can be seen en masse. You can explore waterfalls and caves, walk on glaciers, and camp in the great outdoors in relatively pleasant weather. It does still get cold out though, so bring a warm jacket and good boots and dress in layers for fluctuating temperatures. It’s also a good idea to bring a hat, gloves and umbrella for wetter and colder days.

There are two major festivals that happen in Iceland in June. The first is Sjomannadagur (Seaman’s Day). Celebrated in early June, the event honors fisherman and the fishing tradition, with parades, races, competitions, and community gatherings. The second event is held on June 17 – the Icelandic Independence Day. Parades and fireworks mark the occasion in Iceland.