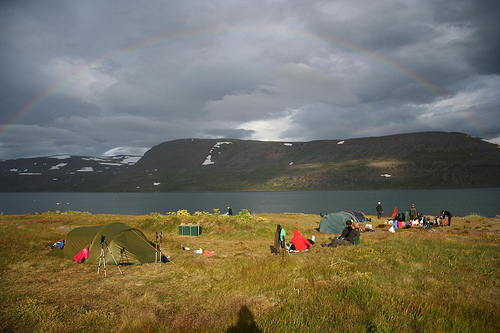 It’s no surprise that July (along with June and August) is one of the most popular times to visit Iceland. Weather is pleasant (though not hot), and the days are long. Though sunset is a bit earlier than it is in June, it’s still averages around 11pm, with sunrise the next day at a very early 3:23am. These long hours of daylight allow visitors to get the most out of a trip to Iceland, even if prices are higher and there are more tourist crowds to contend with.

Temperatures generally range between 8.3 and 13.3°C (46 and 56 °C) but it can get up to as high as 65°F on occasion; temperatures in July and August are slightly warmer than in June, though it can also be a bit rainier.

Summer is the most expensive time to visit Iceland. Prices for flights to Iceland cost more now than any other time of year; expect to pay at least $600-700 round trip from the US. You’re more likely to see prices as high as $800-$1000. High season rates will be in effect at hotels and car rental desks as well.

Despite the high prices and relatively higher crowds (outside of Reykjavik, the word “crowd” is a bit of an overstatement)  the appeal of visiting in July is that you can do so many  outdoor activities nearly 24 hours a day. Instead of cramming to fit everything into a few hours of winter daily, you could go from 6am to 11pm (or later) hiking, horseback, snorkeling, driving and exploring.  In July, hard to get to areas like Hornstrandir in the Westfjords, and the barren interior are fully open and puffin- and whale-watching tours  are in full swing. Icelanders spend lots of time outdoors, hiking and camping, during the summer, though it does still get chilly (especially by North American summer standards), so bring a warm jacket and good boots and dress in layers for fluctuating temperatures.