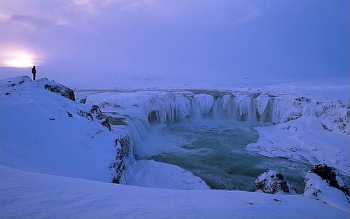 January, along with the rest of winter in Iceland, isn’t a very popular times for tourists to visit Iceland. In November and December daylight hours dwindle to just four hours per day and then slowly begin to increase again in January.  Average sunrise time in January is,10:30am, while the average sunset time is just before 4pm. And while the average temps in Iceland aren’t much colder than those of New York City or Chicago, gale storms and blizzards are common and the temperature often hovers around three degrees below zero.

Despite the cold, short days, there are still lots of things to do in Iceland in winter. Though it can be difficult and even impossible to get to certain remote areas, most of the roads in southwest Iceland are clear and major tourist attractions like the Golden Circle are open. You can even go horseback riding and snorkeling, decked out in special gear to keep you warm and dry. Pack your best cold weather gear and you’ll stay toasty walking around in Reykjavik as well.

The trade off for colder days and less daylight is, of course, fewer tourists and lower prices. Accommodations and car rentals can cost half the price of high-season rates, and flights to Iceland from the US and Europe are deeply discounted. It’s not unusual to see fares of $350-$400 round trip in January.

Mid-January is also a festive time to be in Iceland. The ancient Viking month of Thor, called Thorrablot, takes place from mid-January to mid-February and commemorates the Norse god of Thunder. The Vikings celebrated with dancing, singing, drinking and eating lots of traditional food like slatur (the Icelandic version of haggis) boiled lamb’s heads, rotten shark, and ram’s testicles. Modern Icelanders do the same, re-creating the festival by eating traditional foods and holding community celebrations. Many restaurants offer a special menu that features modern takes on these traditional delicacies.