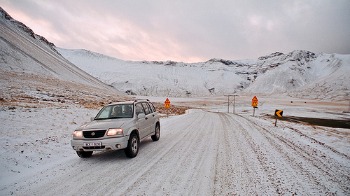 The winter months of January and February, even into March, are the lowest season for tourism in Iceland and it’s not hard to see why. Days are cold, with frequent snow storms, and there are only a few hours of daylight. In February, it gets slightly warmer than it was in January, with temps ranging from -2 to 3° C. Daylight hours also increase from their shortest in late December. On average, the sun rises by 9am and sets by 5:30pm.

Even though the days are cold, you’ll find plenty of things to do in Iceland in winter to fill the short daylight hours. Most attractions and roads in southwest Iceland remain open, though blissfully crowd-free. You’ll need to pack extra cold-weather gear to stay warm while out exploring the beautiful attractions of Iceland, but if you dress properly you’ll find the temperatures are comparable to winter weather in the north of the US.

The main benefits of visiting in winter are fewer tourists and lower prices. Many accommodations and tour operators discount prices by up to 50% during the winter off season. You’ll want to book ahead though, as some places shut down for the winter. You can also score a great fare for flights to Iceland, with rates often as low as $350 round trip.

The ancient Viking month of Thor, called Thorrablot, wraps up in mid-February and is a great time to be in Iceland. The festival celebrates the Norse god of Thunder with dancing, singing, drinking and eating lots of traditional food. Join in a local festival or check out one of the may restaurants that offer a special menu during this time to try thinks like rotten shark and ram’s testicles and other traditional Icelandic delicacies.

Bolludagur or “Buns Day” – a day when people people consume creme puffs in preparation for the Lenten season – sometimes falls in February as well (it’s two days before Lent). The day before Lent is then Sprengidagur or “Bursting Day”  – a day to indulge in a special meal before the sacrifices of Lent. On Ash Wednesday, children ask for candy and treats at local houses and businesses.