Getting to the Westfjords 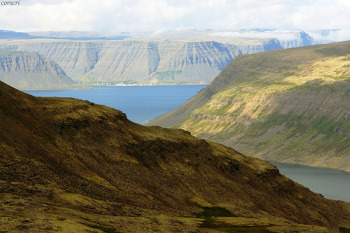 The Westfjords are one of Iceland’s most beautiful areas, with stunning coastlines, rugged cliffs, and expansive fjords as far as the eye can see. The fjords make the coastline quite  jagged, though and the roads are very winding, meaning what looks like a short trip can actually be much longer. For this reason, getting to the area can be a bit of a challenge. Here’s how to do it from Reykjavik.

>> read about things to do in the Westfjords

The town of Isafjordur, the largest in the Westfjords, has a small airport and the flight from Reykjavik on AirIceland is short – only 40 minutes – and usually cheap. Prices range from 6000 to 14,000 ISK each way, with 10,000 ISK (about $80) each way being a good average budget. The airport does have a car rental office.

>> more on getting from Reykjavik to Isafjordur by plane, bus, and car

The Hornstrandir Nature Reserve seems virtually untouched by humans. The fact that is it difficult to get to may have something to do with that.  The reserve is located in the northernmost region of the Westfjords, and is accessible only in summer, and only by foot or boat.

>> more on getting to Hornstrandir

Other areas in the Westfjords

Renting a car will give you the most freedom, but you can get around the area by bus as well. Buses in the Westfjords run regularly in summer, with reduced schedules in winter. While getting to the region by bus isn’t recommended as flying is quicker and cheaper, you can easily travel within the Westfjords by bus. Most towns (though some are little more than a collection of houses) are less than an hour’s ride away from one another.