Getting from Reykjavik to Husavik 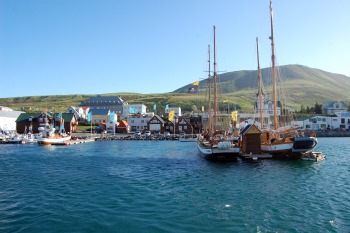 Husavik is located in the northeast of Iceland about an hour east of Iceland’s second-biggest city, Akureyri. Known as the whale-watching capital of the world, it’s a small fishing village whose popularity has risen in recent years thanks to the many whales that pass in and out of the bay. The biggest draw here is the whale watching, but the town is also a great place to base yourself for some exploration of the attractions found in Iceland’s north region.

The drive from Reykjavik to Husavik is just about as easy at it can get…in terms of directions. Just hop on the Ring Road (Hwy1) and take it to Akureyri. Once you pass the town, turn left onto the bridge that crosses the bay. Follow that until you hit Hwy 85 and go left (north), which will take you right into Husavik. The drive is entirely on paved road and can be undertaken any time of year (just give yourself extra time in winter, and pay attention to the weather for notice of storms and strong winds).

Of course, in terms of time and distance, the drive isn’t as easy as it sounds. The distance between Reykjavik and Husavik is 480 kilometers, and given that you’ll be going a maximum of 90 km on the Ring Road, the very least it would take you would be just over five hours. But let’s get one thing straight: there is no way the average tourist is going to travel between Reykjavik and Husavik in five hours. Because at a minimum, you are going to have to stop once or twice to eat, to refuel and to use the bathroom. But you’re also going to want to stop again and again to take photos of the gorgeous landscape you are passing through – sites like rolling hills and steep mountains rising out of fjords, and pristine rivers and wool sheep hopping over craggy lava rocks.  And give how much you’ll be looking around at all this beauty, you probably shouldn’t be driving 90 kilometers per hour, and instead will probably average more like 60 kph. So expect the drive to take at least 7-9 hours. When I made the same journey in September, I left Reykjavik at 8am, and arrived in Husavik at 6pm.

If you’re on a shorter time-table, you can travel from Reykjavik to Akureyri by air, rent a car and then drive the one hour to Husavik. The flight takes about 45 minutes and should cost under 9000 ISK.