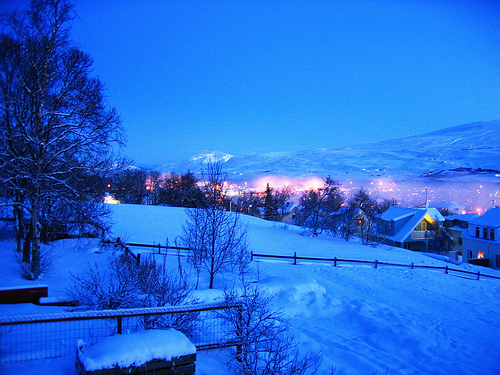 Despite the cold weather and short hours of sunlight, December is actually a  great time to visit Iceland. Early in the month, you can take advantage of low-season savings, and if you come over the holidays you’ll find a delightfully festive atmosphere. The temperature ranges from 2.2°C to -2.8°C, or about 28 to 36°F. It can get much colder on occasion and winter storms are common, both overall, the winter weather in much of Iceland (particularly around Reykjavik) isn’t much colder than in New York City.

During December, the sun rises around 10:50am each day and sets just after 3pm; while the dark days might be a depressing thought, some travelers may find the great savings and lack of crowds make up for the compressed days.

Prices on  flights to Iceland in December – with the exception of right around the holidays – can also be much cheaper than during summer. Deals can put the price as low as $350-$50 round trip (which often includes a few nights of hotel) as compared to $700-$1000 from the US  during peak summer season. Off-season discounts are also offered on hotels, car rentals and some tours.

Many of the same outdoor activities available in summer are also possible during winter months, though you’ll have much less time to enjoy them during the daylight! In December you can go horseback riding, see the Golden Circle sights, explore caves, go dog sledding, see waterfalls, and even go  snorkeling. December is also a great time to try to spot the Northern Lights. Most areas right around Reykjavik are accessible even in a compact rental car, though other more rural areas may require a 4WD vehicle. You cannot access the interior highlands at all.

December visitors should pack for winter with a warm and waterproof jacket and other winter gear like hat, gloves,  and good boots.

The Christmas season kicks off in Iceland on December 12, when the 13 Yule-Lads (naughty Santas with quirky personality traits) come to visit and cause  mischief in the towns. On Christmas Eve, Iceland is very quiet as people celebrate with family, but in the days leading up to the holiday you’ll find a festive atmosphere and plenty of Christmas lights.  On December 31, Icelander’s put on one of the world’s best New year’s Eve parties,  lighting thousands of fireworks into the sky at the stroke of midnight. Afterwards, many Icelanders hit the clubs, partying until the morning.