As you travel from the south coast of Iceland, a garrison of emerald-topped sentinels rises dramatically from the North Atlantic.  The Westman Islands lie roughly seven miles south of the Icelandic mainland, an isolated outpost of hearty fishermen, puffin colonies, and volcanic fury.  This archipelago of 15-18 islands (depending on the tide) are among the youngest land masses on earth – with the island of Surtsey formed as recently as 1967 from an outflow of cooling lava. 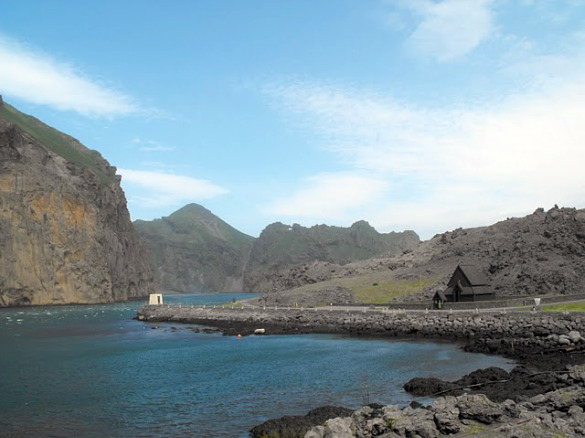 The island of Heimaey is the only island permanently populated – although you may glimpse the occasional cabin built on one of the neighboring islands to shelter puffin hunters.  With just over 4000 residents, Heimaey is an important fishing port – and the town on the five square mile island seems to enjoy a high standard of living. 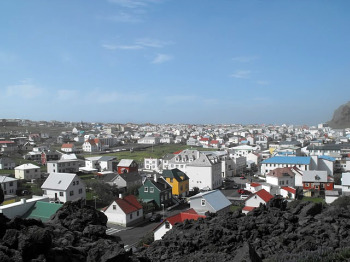 The turbulent story of the Westman Islands has been unfolding for centuries.  They were named for a group of Irish slaves who killed their captors in about 840 AD on the Icelandic mainland and escaped to land briefly on these rocky volcanic islands, before themselves being killed by the slaveholder’s brother.  Eventually settled by Icelanders, the islands then endured repeated raids by Turkish pirates in the 17th century, with many residents killed or sold into slavery.

While the islands have often been threatened from afar, the more consistent threat has come from the very force of nature that created them.  On Heimaey, two ominous peaks – named Eldfell and Helgafell – loom over the town, and have periodically erupted into lava-spewing fury.  In 1973, Eldfell began a late-night eruption that made the dark night glow in a terrifying plume of lava that began a rampage into the town.  By the time the lava stopped flowing over five months later, the residents of Heimaey had lost several hundred homes and buildings to the lava flow, and barely managed to save the harbor so vital to their way of life from being filled in.

Despite its frightening history, however, the Westman Islands present an accessible and fascinating side trip for visitors to the Icelandic mainland.  One option is a 25-minute flight from Reykjavik, where Air Iceland typically departs for Heimaey four times daily for as little as $83 for the round-trip fare.  A second option is the new ferry crossing from Landeyjahofn, a route just opened in July of 2010.  While the previous ferry route took three hours over often-choppy seas, the new route is much closer – taking only 30 minutes, and sailing up to seven times daily.  To get to Landeyjahofn harbor from Reykjavik, you can either drive a rental car or take the Sterna bus route #900a – a two-hour connection that runs about $26 each way.  If you have a rental car, you can take it along on the ferry for $12 each way (adult fare is $8, and children are $4, each way) – but a car is not really necessary on Heimaey.  Providing the weather cooperates, the island is charmingly walkable. 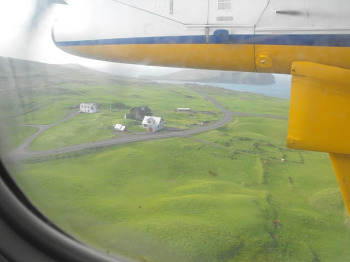 Arriving at the island of Heimaey, the traveler already feels like a rugged adventurer.  High winds can make the flight turbulent and choppy seas can make the ferry ride bumpy – but when you set foot on the island, it all seems worthwhile.  The towering rock formations and dark peaks of Eldfell and Helgafell overhead contrast with the bright-green grass and relaxed, pastoral feel of the countryside.  Always, the sea is nearby – and the view of the archipelago’s other islands depends on the whim of the weather.

Stepping off of the ferry – or a short walk from airport – will put you into the peaceful town of Heimaey.  The moment you begin to talk to locals, the friendly welcome is evident.  Proud of their island and happy to share it with tourists, you will be treated like a guest.  A volcanic film theater and a combined aquarium/natural history museum make for interesting stops in the town.  A number of laid-back restaurants (like the Volcano Café and Café Kro – both near the harbor side) are sprinkled throughout town.

A number of independent activities are available, including golf, hiking and bird watching.  However, the best way to experience the Westmans is a tour.  At Café Kro, you can take in a meal, watch a documentary about the 1973 eruption, and book a tour through Viking Tours (www.vikingtours.is) – either by land or by sea (weather and ocean conditions permitting).  This family-run establishment will feed you, educate you, show you around and even give you a ride back to the airport (if flying out) for a very reasonable price.

We took the land tour of the island, as the sea was too choppy the day we visited.  Our young, witty guide (Unnar Gisli) provided a great mix of local flavor, knowledge of history, and humor as he drove us around sites on the island.  On the south point of the island – site of one of the world’s largest puffin colonies – sheep and bird share a perch atop the craggy, blustery cliffs overlooking the sea.  Near the harbor side is a beautiful replica of a Scandinavian stave-style church, celebrating 1000 years of Christianity in Icecland. 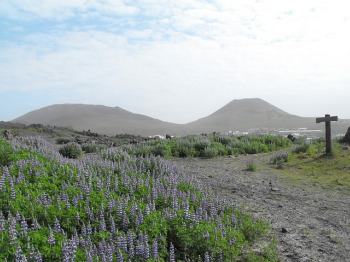 The lava field – which brings an abrupt end to the streets of clean, bright-colored homes on the east end of town – is a fascinating modern archaeological site, sometimes referred to as “Pompeii of the North”.  Street signs driven into the lava several feet above the rooflines pay respect to the homes buried underneath – and many of the homes on the edge of the lava flow have begun to be dug out, an activity in which tourists are invited to participate.  Flower-strewn trails crisscross the top of the lava field.  This is an excellent picnic spot from which to view the harbor and town below and the volcanic peaks above.

The great thing about the Westman Islands is that it can easily be done as a one-day trip.  We arrived in Heimaey in time for breakfast, returned to Reykjavik after dinner, and still felt like we got a great experience of the place.  However, if you have time, you may just decide that the friendly islanders and beautiful setting warrant more time (which is truly understandable).  In that case, a handful of hotels, hostels, and guesthouses are available – including Guesthouse Hreiðrið, Guesthouse Sunnuholl, and Hotel Þórshamar.  More information on lodging and other aspects of travel to the Westman Islands is available at www.visitwestmanislands.com.

Jim Reynoldson is an avid traveler and writer who blogs at jimbonvoyage. You can read more of his writing and learn about his recent trip to Iceland there. All photos courtesy of Jim Reynoldson and may not be used without permission.