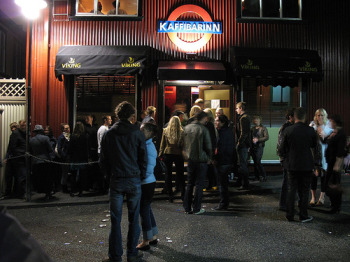 Financial collapse. A belief in elves and a delicacy of rotten shark. Volcanic eruptions. Sure, these are all things you may have head about in association with Iceland. But I know what you what you really want to learn about….the Reykjavik rúntur.

The word rúntur translates to “round tour” and that’s pretty much what it is – a round tour of the neighborhood, a way to pass the time on long, dark winter nights or during the seemingly endless days of summer.

In smaller towns, the rúntur started out as a traditional of the local kids driving around. In Reykjavik, it’s a bit more adult (the legal drinking age in Iceland is 20 years old) passtime…and one that involves lots, and lots of alcohol. In the capital, the rúntur takes place every weekend, when normally early-to-bed Icelanders seem to pack a week’s worth of partying into 48 hours, moving from bar to bar well into the wee hours of the night or the early hours of the next morning.

Drinking in Iceland, despite the country’s financial problems, is still quite expensive. Expect to pay 500 to 900 ISK for a beer in any bar and much more for a cocktail. If you plan on doing the rúntur right, that can really add up. So, do as the Icelanders do and pre-party at home, or in your hotel room.

Hopefully, you’ve planned ahead and bought some alcohol at the airport Duty Free on your way into the country. Booze here can cost 60% less than it does at the liquor shops in Reykjavik.  Go out to eat, or have a meal in your guesthouse or hotel and then hit the town around 11pm. Icelanders tend to dress up on weekend nights, and in a city known as being very fashion forward, that means you should wear something equally stylish and trendy to fit in. Jeans are okay for men, though you’ll find many wearing trousers or suits as well. Women can wear nice jeans, but dresses (and even some open-toed heels in winter) are not uncommon.

It’s not hard to find the action in Reykjavik. Just follow the well-dressed and tipsy people and listen for the sounds of blasting club music. Poke your head inside a club and you’ll know instantly if it’s the place you want. To find the hot spots, just look for the largest crowds. Most of the activity takes place on Laugavegur Street.

The all-important question…what to drink? Well, you can drink what you like because, though beer was banned in Iceland until 1989, you can now find pretty much anything here. Beer will be the cheapest option, especially domestics like Viking, Kaldi, Thule, and Egils. You can also get wine, cocktails, and most liquors, including the strong, smooth Reyka vodka. Don’t worry about buying rounds for friends (that’s not expected here) or be ashamed to nurse your beer.

Many people limit themselves to save money, and some even sneak in flasks or take a few nips on the street to further cut costs. As the night draws to a close…or more likely, as early morning rolls into the next day…it’s time to head back to your hotel. But first, a compulsory stop for an Icelandic hot dog – made of lamb and covered with onions, ketchup, mustard and a kind of gravy, it’s one culinary experience you can’t miss and the only way to cap of your night on the rúntur.