The Free My Reykjavik Walking Tour 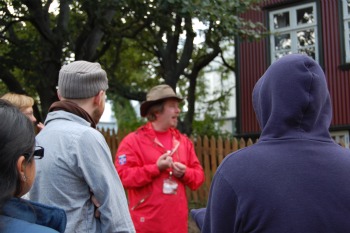 I have a confession to make: I’m just not a tour person. I want to like tours. I see the value in tours. But every tour I have taken has disappointed me. Nearly every time I found the tour guide too dry, or t0o corny, or I just didn’t learn anything new. So I was skeptical about the My Reykjavik walking tour, offered for free each day at 1pm from May 1st to September 15.

But to my surprise the guide for the tour,  Jonas Freydal, was actually neither boring nor corny. Instead he was funny, entertaining, engaging, and very informative. Not only did he shows us several parts of Reykjavik I’d never explored before, all while offering up historical information, he also gave us his own perspective on culture in Iceland, on the current political situation, on the financial crisis and more.

Born in Iceland, Jonas lived in Canada and the US for a while before coming back to Iceland to raise his kids. He even showed us the house he almost bought shortly before the financial collapse, pointing out that had he bought it at the offered price and mortgage rate, he’d now owe the equivalent of hundreds of thousands of dollars more that what is was worth. That’s not exactly the type of info you’ll find in most tourist brochures, and I appreciated Jonas’s candor in talking about the struggles faced by many citizens.

It wasn’t all sober though. Regaling us with tale of the sagas and elfish exploits, Jonas kept us thoroughly entertained throughout the easy two hour walk. At the end, he offered his opinions on good places to eat, as well as which over-priced tourist traps to avoid. I took his suggestion for a good place to try Plokkfiskur (a traditional fish dish) and wasn’t disappointed.

I had originally wondered why the tour would be free, but Jonas explained that they operate on tips  (500 ISK – just under $5 per person – is standard and well worth the cost) and also hope that people who take the tour will then book additional tours with the company. While we were on the tour, Jonas mentioned the other tours once or twice, but it never came off as a “hard sell,” and though I didn’t book one of the other tours, I plan on doing so on my next trip.

If you’re looking for an easy way to learn about Reykjavik and see the most important parts of the city in a short time, I highly recommend the free 90-minute tour. It’s only scheduled daily during summer, but can be booked in advance during winter. The tour meets in front of the My Reykjavik office, Austurstræti 6.