The Best Icelandic Souvenir: A Lopapeysa 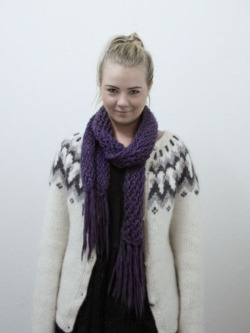 All over Iceland, you’ll see locals and visitors wearing warm knit sweaters with a distinctive pattern around the neck. The sweater is called a lopapeysa, which came into fashion in the middle of the 20th century and has lately seen a resurgence in popularity among the younger generations. What once was something generally given as a gift by a doting grandmother is now a coveted piece of fashion for both Icelanders and tourists.

The defining characteristics of the lopapeysa are the yarn used – called lopi, it is made from Icelandic sheep and contains both wool and wind hairs, making it soft and very warm – and the wide yoke design around the neck. The most traditional sweaters are exactly the same between the front and back, while some more modern designs are button or zip-front cardigans or have hoods. Un-dyed wool is the traditional method, but artificial dyes are sometimes used. It’s believed that the pattern is fashioned after a traditional Greenlandic women’s design.

Lopapeysur (the plural of lopapeysa) can be bought in any of Reykjavík’s many tourist shops at anything between 20,00 to 30,000 ISK (about $120 to $250). If you can’t quite swing that price, you can find much cheaper varieties at the weekend Kolaportið flea market. Here you’ll find them for as low as 10,000-15,000 ISK. Wear a slim-fitting shirt so you can try them on, and bring a camera and a friend to take photos to help you decide. Most shops only take cash but there is an ATM in the market.

You can also buy one at Thorvaldsens Bazaar a shop run by volunteers that donates all proceeds to a local children’s hospital and Save the Children Iceland.

The Handknitter Association of Iceland has several stores. The one at Skólavörðustígur 19 may have the best selection of lopapeysur in Reykjavík (though they’ll cost a bit more). If you can’t afford a sweater, or aren’t convinced you’ll wear it back home, you can also pick up wool handknit items like hats, gloves and scarves.