Should You Visit Iceland While Eyjafjallajökull is Erupting? 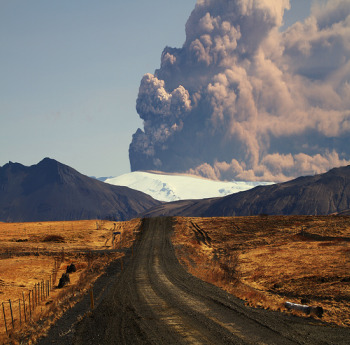 After a week of interfering with air travel in Europe, the ash from the Eyjafjallajökull eruption started messing with flights over Iceland (which had previously still be able to operate flights domestic flights and flights from North America with no problems) this week. Keflavik was closed on several occasions but, determined to keep the country open to visitors, Icelandair got creative and instead flew into Akureyri, bussing tourists to and from Keflavik.

Despite the temporary airport closures, those who’ve already booked flights to Iceland should still be able to arrive on schedule. If you were thinking about going to Iceland this summer or fall and are now unsure because of the volcano, here are a few things to consider.

Everyone knows that, thanks to Iceland’s famous financial collapse, the country is cheaper now than ever before. Of course, it’s still not cheap, per se. Many prices have been adjusted to account for the devalued currency, and many tour operators and hotels asked for payment in Euros anyways, so you’ll see no discount there.

Summer is high season, and the most expensive time to visit Iceland. From late fall to early spring you can expect airfare to be about half what it costs during summer, and hotels and rental cars may be discounted by 30-40%. However, summer and early fall are the most popular times for a reason. Summer in Iceland is gorgeous, all the roads are open, tours are offered late into the night, and the sun barely sets. And now there’s a new attraction to see – the Eyjafjallajökull volcano eruption.

It seems that those who are flocking to Iceland to see the volcano, or who had already been planning a visit, are balancing out the number of people who are avoiding the country  – at least for now. While I’ve seen a few low fares for summer, most have been hovering around $700 to $950 per person, which isn’t much less than normal. During early fall you’ll see bigger discounts. I’ve seen prices as low as $540 round trip for the first week of September.

How dangerous is it to visit a country while a volcano is erupting? Not very. Though Eyjafjallajökull is spewing ash into the air (and around the southeast countryside near the volcano), it hasn’t affected the rest of the country. If you stick to Reykjavik, the southwest, the northwest, north and northeast, you may not even know that a volcano is erupting.

There is some danger in visiting the southeast of the country, closer to the volcano. If you do want to get an up close view, go with a licensed guide. They’ll know how to get you there safely and will have the proper gear. Several tourists who tried to hike towards the glacier had to be rescued after they got lost, and two actually froze to death because they were not properly outfitted. Driving in the region is still dangerous as well. As the ice on the glacier continues to melt, it has been causing flash floods and wiping out roads. If you must drive in this area, check the road conditions before you set out, and spring for the 4-wd vehicle.

So far, Icelandair has been able to reroute incoming flights from North America to airports unaffected by the ash cloud. If that becomes impossible, you may lose out on your vacation to Iceland, at least until the ash clears. The airports haven’t been closed for more than a day at a time, so the odds are in your favor that you’d still get to go, just a day or two late. If that’s not a risk you are willing to take, then now may not be the best time for you to visit.

Unfortunately, travel insurance won’t help if you’re trip is canceled because of the volcano, unless you bought your tickets before April 13. If you book now, you’ll be assuming the risk.

The other concern is the eruption of another, far more dangerous, volcano, the nearby Katla. Historically, whenever Eyjafjallajökull has erupted, Katla has followed within about six months. There’s no telling if Katla is ready to blow anytime soon, but suffice to say you do not want to be around if and/or when she does.

So, should you go to Iceland while Eyjafjallajökull is erupting, and when there is the possibility that Katla may erupt too? Well, that’s a decision each person will have to make on their own, weighing the pros and cons. For me, it was a no-brainer. I snagged a $540 round trip fare for September, and am crossing my fingers that the skies will be clear on the day I’m set to fly. I’m not as concerned about the possibility of ash shutting down the skies on the day I’m supposed to leave. After all, I can think of many worse places to be stuck for a few days than in Iceland!