See More of Iceland with an Air Iceland Day Trip 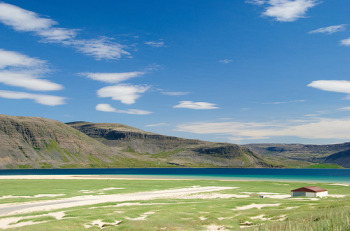 Despite its small size, Iceland is a deceptively large country to travel across. Due the inhospitable nature of the rugged and snowy interior, it’s impossible to drive across in winter (and should only be undertaken with the proper training and equipment in summer), so in order to travel from Reykjavik to the northeastern side of the country, you’ll need to take the long way around, via the Ring Road.

Other distances suffer from a similar problem. Though the number of kilometers may be few, poor road conditions, bad weather, and lots of twists and turns can make the drive take much longer than you would expect.

If you only have a short time in Iceland, or if you just want to base yourself out of Reykjavik, but you still want to see more than the southwest of Iceland, look into taking a day trip with Air Iceland.

Air Iceland services several domestic routes from Reykjavik, including Akureyri, Grimsey, Vestmannaeyer, Isjafjordur, and Egilsstadir, and offers routes to Greenland. The company has also put together several day trips, some of which are offered year round, that include flights to and from Reykjavik, an 8-12 hour tour of a region, and transportation on the ground.

In the north, you can explore Lake Myvatn, see the northern capital of Akureyri, check out the small whale-watching town of Husavik, or marvel at Europe’s largest waterfall, Dettifoss. Visit the east Iceland town of Egilsstandir to see a how many Icelandic fishermen still live, travel just 20 minutes over the Atlantic to the Westman Islands, or see the rugged westfjords and the capital Isafjordur, where you can visit the country’s oldest dwelling or take a ferry to the remote and uninhabited region of Hornstrandir.