Photos of the Iceland Volcano 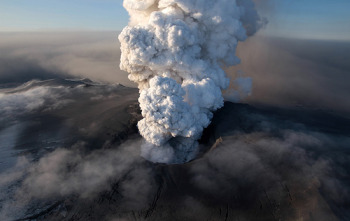 However disruptive and destructive Iceland’s Eyjafjallajokull volcano may be, you’ve go to admit that it is amazing to look at. A perfect example of the raw power and beauty that you’ll find on Iceland, the volcano certainly does its job of making one feel very small and insignificant compared the forces of mother nature. Here are some of the best photos of the Iceland volcano I’ve come across so far.

Boston.com, as it usually does, has some of the best photos, including shots of lightening inside the ash and of the local landscape and how it has been affected by the falling ash.

Patrick Mylund Nielsen put together some great shots from on the ground in Iceland, with several incredible shots of the ash cloud filled with lightning.

The Huffington Post has a gallery of ash photos, including an amazing satellite shot that shows the gray stream of ash heading towards Europe.

Shots of the ash over houses in Iceland can be seen here, here, and here. Here ash completely covers the road, while here and here it hangs ominously in the air. And because I can’t resist a shot of Icelandic horses, here’s one of a horse in a field with the ash cloud behind him.

And finally, the shot that’s been called “the most terrifying picture of a volcano”  shows (via satellite image) the three craters that top the mountain.