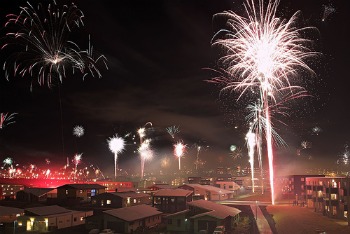 Like elsewhere around the world, New Year’s Eve in Iceland is celebrated with a countdown to midnight and tons of fireworks. Though unlike many other places, you won’t find the bars and clubs to be the most busy. People in Iceland have a family dinner on New Year’s Eve, and don’t begin the major partying until after midnight. But once begun, the party rocks on into the next morning.  New Year’s Eve is probably the biggest party night of the whole year.

Fireworks are one of the most important and popular aspects of New Year’s Eve in Iceland. Everyone buys fireworks and sets them off in the street and in backyards all night long, with the show reaching its high point at midnight. Once the New Year has officially begun, people hit the clubs after midnight where they dance and drink until 3, 4 or even 5 in the morning. New Year’s Day is relatively quiet, as you might expect after all that partying.

If you don’t have some Icelandic friends with whom you can dine and drink before heading to the clubs, you have a few options. If you’ve got room in the budget, head out for a splurge dinner at one of the city’s best restaurants like Fishmarket, Dill or Lækjarbrekka. Go to dinner around 9 or 9:30, finish by 11:30 and then step outside to watch the fireworks at midnight. If you’d prefer to save a bit of money, grab a pizza, hot dog or a hearty noodle dish at one of Reykjavik’s budget dining options and then retreat to your hotel for a few drinks before midnight. And if your budget is much smaller, you can simply cook dinner at your accommodation, rest up, have a few drinks and then hit the town around 12:30am for one or two more drinks.