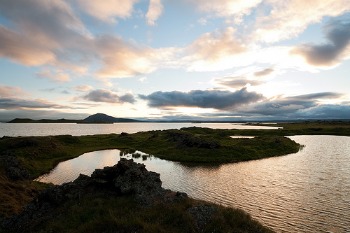 Mývatn (which means midge lake in Icelandic) was created about 2300 years ago by a volcanic eruption. Now, it’s a shallow lake (Iceland’s fourth largest) that is home to the largest variety of ducks of anywhere in the world. The name of the lake comes from the huge numbers of midges found here in summer. The lake is also home to dozens of varieties of birds and plentiful lake char. It’s only about five meters deep in most places and has over 40 small islets. The area around the lake is extremely volcanic and saw nine eruptions from 1975 to 1984.

While visiting a run-of-the-mill lake many not hold much appeal, Myvtan is worth the trip. Due to it’s shallow depth, the water is extremely still and clear, and the craggy moss-covered islets  give it a drama you won’t find in an average lake. The area around the lake makes for endless scenic photos as you scramble up and over rocky hills and cliffs.

How to get there: From Akureryi, just follow the Ring Road, which curves south around the lake. From Husavik, head south on road 87 and go right on road 1 to circle the south end of the lake.

What to do: The main draw of Lake Myvatn is to simply drive around it, stopping along the way to enjoy a picnic lunch and for plentiful photo ops such as the lave formations at Dimmuborgir, Mt. Hverfjall, Krafla volcano, and the geothermal area east of Námaskarður. There are two small towns located on the lake – Skutustadir and Reykjahild. Both offer basic accommodation and dining, bike and car rentls in season, grocery stores and petrol station.   Tour operators offer guided tours of the lake, hiking around the lake and Krafla volcano and horseback riding, as well as fishing for salmon in the river Laxá. Since the year 2000, a marathon around the lake takes place in summer. The Myvatn Nature Baths are also a short drive away.

Tips for visiting: The drive around the lake could take as little as 45 minutes with minimal stops, but give yourself at least two hours to fully enjoy it. A good day trip from Husavik or Akureyri is to spend the morning at the Myvatn Nature Baths, explore the lake area, and then visit Godafoss waterfall.

In summer, the lake really lives up to its name and you’ll find that as soon as you get out of the car (or even roll down the window for a photo) you’ll be swarmed by midges. Cover as much skin as you can and bring insect repellent.