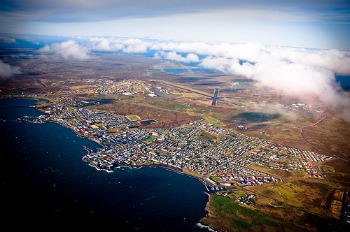 Keflavík,  in the Reykjanes region of southwest Iceland, is a large town with a population of about 8,000 people. In the 16th century, it was a trading port and major fishing town; during World War II it grew when US forces stationed here built an airstrip outside of town. In 1949, when Iceland joined NATO, the country agreed to let the US continue to use the base and to expand it into a refueling stop for their aircraft, a practice that continued for  50 years.

Even when the base was in operation, Keflavik was more of a workaday town than a tourist attraction. Though the airport is just a few minutes away, it’s not advisable for tourists to stay in this small, mostly residential town, unless catching a very early flight the next day. Within the town are a few hotels and hostels – the Flug Hotel, the Hotel Keflavik, campsite and the youth hostel – as well as a supermarket, post office, tourist office, banks and a BSI bus terminal that offers daily connections to Reykjavik.

There’s a restaurant in the Flug Hotel, the resto-bar Rain, which offers tasty pizzas and fish, and Paddy’s Irish Bar and Pub, and whale watching trips depart from the town in summer.