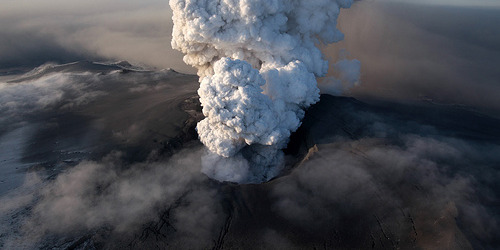 If you’ve been watching tv or surfing the web at all lately, you’ve probably heard that Iceland has been experiencing a little bit of volcanic activity.

The land of “fire and ice” didn’t earn its nickname for nothing, and the island is no stranger to volcanic activity, but the most recent eruption is earning lots of headlines because of the widespread disruption to air traffic that it has caused.

First there was the Eyjafjallajökull eruption that started on March 20. Plumes of lava shot into the air and formed liquid lava waterfalls. Flights were postponed for a day and hundreds of farmers in the area were evacuated safely. Many companies began offering tours to see the lava. A second fissure opened on March 31.

The first eruption faded, and then on April 14th, a new one began, this time underneath the glacier. The ice melted, which resulted in flooding, roads being washed away and more evacuations. The problem for travelers though, is the plume of ash that has risen into the sky and begun wreaking havoc on air travel to, from, and within Europe. Because the eruption is taking place under a glacier, it has been much more explosive than the one from March 20. Check out some photos of the powerful show here.

“Basically these sort of explosive eruptions generate a lot of steam and a lot of volcanic gases, a lot of very fine fragments, rocks and solidified lava. Airlines are very, very careful about flying around volcanic ash because they can severely damage an aircraft.” Once the glacial ice around the volcano melts, the amount of ash emitted into the air will likely drop.

The ash cloud is also affected by the weather. From the Los Angeles Times:

Professor Jon Davidson of the department of earth sciences at Durham University in England said the dispersal of the cloud is dependent on the weather. The cloud can be blown elsewhere, the ash could all fall to Earth, or the ash particles could spread and become diluted, no longer posing a threat to aircraft, he said.

Airports in the UK, Ireland, Norway, Sweden, France, Germany, Denmark, Poland, Finland, Belgium, The Netherlands, Austria, Lithuania, Bulgaria, Czech Republic, Hungary and Romania were closed or canceled many of their scheduled flights on Wednesday and Thursday. Of the 300 or so international flights that arrive on a given day, only 100 arrived on Thursday, and on Friday, less than half of Europe’s normal air traffic will take to the skies.

Closure estimates are constantly changing, but at the time of writing, many airports are expected to still be closed (or accepting a very limited number of flights) through the weekend. Most airlines are allowing customers to rebook their flights at another time with no fee.

The ash is so dangerous to planes because the small particles can get into the plane’s engines and shut them down, as happened to a British Airways flight from Malaysia to Australia in 1982. All of the plane’s engines failed, but luckily they were able restart once the plane descended out of the ash cloud. A similar incident happened in to a KLM flight in 1989 as it was flying over Alaska’s Redout volcano. It flew into an ash cloud, lost power, and dropped 13,000 feet before the engines restarted and the plane was able to land safely.

How long will the effects last?

The volcano appears to still be going strong, spewing ash into the sky and ensuring that flight disruptions will be common for at least the next few days. As long as the volcano is surrounded by ice and continues to erupt, we’ll likely see more travel problems, and experts say the volcano could erupt off and on for months. In fact, the last time the volcano under Eyjafjallajökull erupted, in1821, it lasted for nearly two years.

One UK bookie is even taking bets on when the eruption will cease.

Ironically, flights to Iceland from the US are among the few still operating as planned. This is because Keflavik Airport is located to the west of the volcano, and the ash cloud is moving east. Reykjavik has not been affected by the ash cloud at this time.

Areas to the east of the volcano haven’t been as lucky though. According to the Guardian:

One local farmer told Icelandic television that he woke yesterday morning to find a layer of ash covering everything. Residents of Kirkjubaerklaustur, about 60 miles east of the eruption, said yesterday that ash was falling thick and dark, making it difficult to see more than a few yards.

“The ash is causing huge disruption to the east of the glacier,” Urður Gunnarsdóttir, a press spokeswoman for the foreign ministry, said at lunchtime yesterday. “You can’t see anywhere and you can’t drive because it is just black, like night.”

Erlundur Bjornsson, a sheep farmer 95km (59 miles) east of the volcano, told the Guardian that ash had fallen heavily and it had been “almost totally dark. The plume came over my farm a couple of hours ago, but the wind direction has changed slightly and it is very fine here, a grey dust that gets in your eyes,” he said. “It covers everything and there is a smell of sulphur in the air.”

The BBC also has some footage of the flooding that has been caused by the melting glacier, and which could pose a threat to the people nearby.

>> check out amazing photos of the volcano eruption here

>> stranded by the eruption and need a laugh? here are some of the best jokes about the volcano