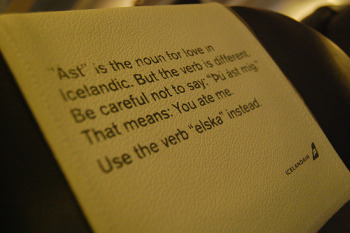 The Icelandic language is incredibly difficult for foreigners to learn. It’s a Northern Germanic language, most closely related to Norwegian (or actually more closely, the dead languages of Old English and Norse). Grammar is quite complicated, all vowels appear in two forms, and the alphabet contains four letters from the Old English language – the most commonly used being Þ and Ð. Unlike most cultures, Icelandic people do not create new words – they combine words from the original language to make a new one. So, for example, the word for “computer” is “Tolva” made up of two words. “Tala” means number and “vola” means prophetess, so together it means “number prophetess”.

Though Icelandic is the language used throughout the country, many people in Iceland speak English and are quite willing to speak it with foreigners. Danish, German and France are also taught in school and widely spoken among the younger generations. You may run into a few people who are less familiar with English (particularly in more remote areas and among the older generation), but generally you’ll do just fine without learning a word of Icelandic.

However, unless you stand out as a tourist, most people will address you first in Icelandic, and it’s just polite to know a few words of the native language of any country you are visiting. Here are a few basic words you should know in Icelandic. And for a quick audio tutorial, check out this video.

There is no Icelandic word for “please”.