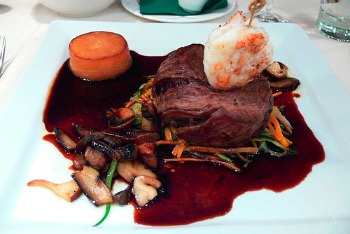 Icelandic food has of late taken a much more modern turn. While in early times the people of Iceland struggled to feed themselves in the harsh climate – and therefore found some creative ways to use what they could get from the land and sea –  modern Icelanders have many more delicious, creative and convenient choices available. While some food products (most notably fruits, vegetables and some packaged goods) are imported, they are more expensive so the bulk of the Icelandic diet is still provided by locally-produced foods like fish, meat, and dairy.

Meats and fish
Animal products play a very important part in Icelandic cuisine. Lamb is the staple red met (cattle are most often raised for dairy, not meat) and is generally free-range and grass-feed, and very tender and delicious. Horse is widely consumed as are seabirds like puffins. Even reindeer are occasionally found on restaurant menus. But perhaps the most common building block of the Icelandic meal is fish – salmon, trout, haddock, cod, plaice, wolffish, halibut, herring, shrimp and lobster are all locally caught and very fresh. You can’t go wrong with a simple grilled fish filet, a serving of fish and chips, or a hearty fish or lobster soup.

Whale is also sometimes eaten, though more often by tourists than locals. Minke whaling was banned for two decades, but the red meat is now available again, amidst some controversy,  in many Icelandic restaurants.

Fruits and vegetables
Though Iceland relies on imports for most sweet fruits, the advent of new technologies made it possible to grow many vegetables and some fruits, like bananas, here. Rutabaga, cabbage and turnips are usually started in greenhouses in the early spring before being moved outside once summer arrives; tomatoes and cucumbers are entirely produced indoors. Other veggies and fruit like crowberry, blueberry, rhubarb, moss, mushrooms, wild thyme, and angelica grow naturally outdoors. 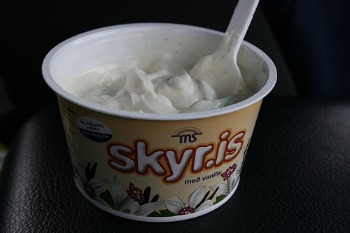 Dairy
Icelanders seem to have a near obsession with dairy, with dozens of different kinds of milk and butter available in stores. There is some locally produced cheese, though much of it is imported. The most widespread Icelandic dairy product is skyr; technically a cheese, it looks and tastes more like yogurt. It’s very low in fat with a very high protein content can can be found at every grocery and convenience store in the country. Many restaurants also use it in dips and desserts.

Grains and breads
Though it’s easy to find hundreds of varieties of breads, grains, and pastas in any Icelandic grocery store, they don’t play a big part in the traditional Icelandic meal. Traditional breads, include rúgbrauð, a dense dark rye bread (usually served with traditional foods, like plokkfiskur)  and flatkaka, a soft brown rye flatbread.  Kleina, a small fried dough knot is a traditional pastry.

Hot dogs
Icelanders are nearly fanatical about their hot dogs, and once you taste one, it’s easy to see why. The hot dogs are made mostly with lamb (and sometimes with a little pork) and traditionally topped with mustard, ketchup, fried onion, raw onion and remolaði, a mayonnaise-based sauce with sweet relish. And in a country known for being exorbitantly expensive, they are a delightfully low cost way to fill up and try a local specialty.

Other options
The foods listed about are the most traditional served in Iceland, but that doesn’t mean they are your only options. Like most modern countries, Iceland offers a whole range of culinary delights. In Reykjavik, you can nosh on Japanese sushi, Italian pasta, Argentine steak, Mexican tacos, Indian curry, Vietnamese noodles, and more. And in even the smallest towns you can find a simple hamburger or a slice of pizza. And though the country has no more McDonald’s locations, it does have a Subway, KFC, TGI Fridays, and Ruby Tuesday.

>> dining and drinking in Reykjavik

>> dining on a budget in Reykjavik