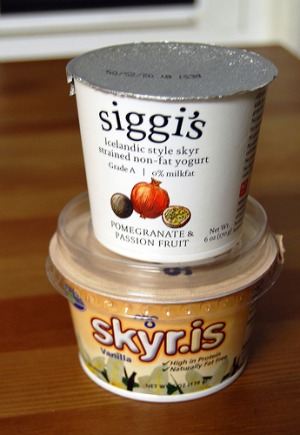 Skyr (pronounced skeer) is like an Icelandic cultured yogurt (though technically it’s actually a cheese) but it’s unlike any other yogurt in the world. Made by introducing live active cultures into skim milk and then straining off the whey, the result is a much thicker, creamier, concentrated yogurt.

The production of skyr requires up to four times the amount of milk that is used for regular yogurt, leaving skyr with as much as three times the protein. High in protein and low in fat and sugar, skyr is a very healthy product that plays a large part in the Icelandic diet.

In Iceland, you’ll find skyr sold at every grocery store and at most convenience stores. The small tubs cost only a few dollars and come in plain and flavors like strawberry, vanilla, and blueberry (which are that is less sweet and more tangy than other fruit yogurts because less sugar is added).

Skry makes a great breakfast, lunch, snack or dessert, and is delicious added to smoothies or topped with fresh fruit. You’ll also see skyr used in some sauces (like the dips at Fish and Chips) and in some desserts like creme brulee and cheesecake.

If, like many people, you find yourself addicted to skyr after your trip to Iceland, you’ll be happy to know that you can find it in the US. Skyr.is is available at Whole Foods stores in 37 states. Siggi’s, made in New York state by an Icelander using a modified version of his family’s recipe, is also available at Whole Foods and many independent gourmet food stores around the country.