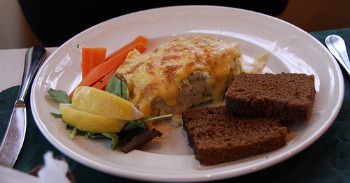 At first glance, plokkfiskur doesn’t look very appetizing. And where you learn the name means “mashed fish” it doesn’t gain much appeal. But looks can be deceiving, as this traditional dish is actually quite delicious. In early times, poached haddock (or other white fish) was served with boiled potatoes several times a week and there were usually leftovers. Those leftovers were then used to create this dish. Nowadays, people buy fresh fish just to make it, and it is a very popular choice among both tourists and locals at Icelandic restaurants.

In most plokkfiskur recipes, boiled cod (or haddock or halibut) is flaked with a fork and then mixed with boiled quartered potatoes and a sauce of onion, butter, flour and milk. Curry powder, salt and pepper are added to season it, along with butter. Then béarnaise or hollandaise sauce and cheese are added and the dish is grilled until light brown. It is traditionally served with dark rye bread and butter.

While it’s certainly not a light dish by any means, plokkfiskur is hearty, delicious, and perfect for filling your belly on a cold night. Þrir Frakkar in Reykjavik is widely regarded as the best place to get a traditional plokkfiskur, but you can also find it at many other restaurants throughout the country.