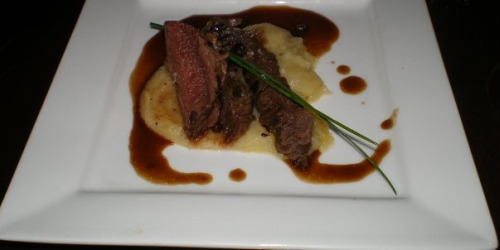 In early times, the people of Iceland had to work hard to feed themselves. They ate what they could find and, as time progressed, developed some interesting ways of living off the land and sea to keep their bellies full.

These traditional foods , called “thorramatur“, are particularly popular with locals during the winter and include preserved foods like smoked and salted lamb, singed sheep heads, dried fish, smoked and pickled salmon, and fermented shark. You can find some of these served in restaurants or markets if you want to give them a try.

Perhaps the most famous of Iceland’s delicacies is a fermented shark called Hákarl, which is not for the faint of heart of weak of stomach. The shark meat is actually poisonous when fresh because of high uric acid content (sounds tasty already, doesn’t it?). The raw shark is put in a hole, covered with sand, gravel and rock (which helps press the acid out) and left to basically rot for several weeks. The smell is said to be much worse than the taste, but most people still gup it down along with a shot of the local liquor, brennivin.

Banned for two decades, minke whale (the smallest and most populous whale in the area) is now available again in many Icelandic restaurants. Though many tourists assume the meat will be blubbery, fatty, or slimy, it’s actually a red meat, albeit one that has a definite salty taste that makes it clear it hails from the sea. Whaling is still controversial in Iceland (each ship is only allowed to catch a certain number of whales per year), but trying whale is often tops on a tourist’s culinary agenda. It’s usually served grilled, often with a simple red wine sauce, though some more avant-garde offerings, like minke whale carpaccio or even whale wellington, are also cropping up at trendy restaurants.

You know those cute little birds that you see swarming all over Iceland’s sea cliffs? Yes, you can eat those too. And like the minke whale, they too are pretty delicious. You’ll find smoked puffin (which tastes a bit like beef jerky) covered in brennivin sauce, grilled puffin, and fried puffin served with gravy. You may also see raw puffin hearts, which are less common, and usually only attempted by the more adventurous eaters.

Yes, even Rudolph and Mr. Ed are on the Icelandic menu, (As a horse-lover and equestrian, I could not bring myself to even contemplate trying horse meat, but I’ve heard it’s tough and fairly tasteless) though reindeer is much more common than horse (usually listed as “foal”). Reindeer live wild in the east of Iceland, and hunters are permitted to kill a certain number every year.

Icelanders have traditionally relied on fish for much of their diet, and plokkfiskur was one more way to serve that fish, often using the leftovers from the previous day’s catch. The dish is made from cod (sometimes haddock or halibut are used) that is boiled and then mixed with milk, butter, flour, onion and potato until it forms a mash. The fish mash is often then topped with bearnaise or hollandaise sauce and cheese and then broiled until the top is a light brown crust. It’s traditionally served with dark rye bread.