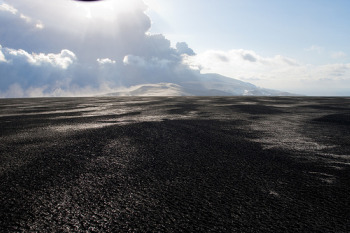 Since the Eyjafjallajökull volcano began erupting, spewing ash into the air and shutting down air traffic all over Europe, jokes about the volcano’s hard to pronounce name have been circulating, along with jabs at Iceland for its financial state. Though the situation is far from funny for those stranded and for the Icelanders who are dealing with the ash cloud and flooding resulting from the eruption, at least people can find a bit of humor in a bad situation.

Here are some of the funniest jokes and jabs about the Iceland volcano. And for the record, the name comes from “Eyja”  – for island, “Fjalla” – meaning mountain, and “Jokull” – for glacier.

You can listen to the correct pronunciation here.

It was the last wish of the Icelandic economy that its ashes were spread all over Europe.

First the economy goes under, now Iceland sets itself on fire. I smell insurance scam!

Whenever a cat walks across a keyboard, an Icelandic volcano gets a name.

There’s no volcano in Iceland. Chuck Norris is just having a barbecue.

How do you pronounce Eyjafjallajökull? I believe it’s called “The volcano in Iceland.”

Four short, barefoot young men were last seen setting off for Eyjafjallajökull. The nature of their journey is not yet known.

It’s too early to make jokes about the Icelandic ash cloud… we need to let the dust settle first.

All this ash cloud talk is going over my head.

Eyjafjallajökull – named when the person writing about it fell asleep on his keyboard.

Eyjafjallajökull is erupting only twice a year — April through September, and October through March.

And from the always hilarious John Stewart: Volcano – I shall call you “Kevin.”