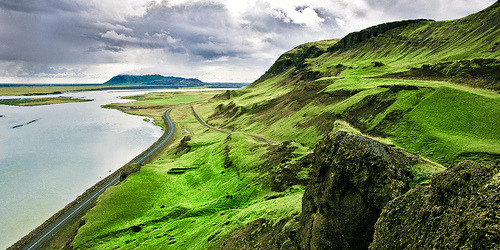 Unless you’ve been cut off from world communication lately, you know that Iceland’s been in the news a lot this year. Just as the dust was beginning to settle from the 2008 financial collapse, a new kind of dust – or rather, ash – hit the air when the Eyjafjallajokull volcano began erupting, disrupting air travel to, from and within Europe and costing dozens of industries billions of dollars. The world spotlight turned to Iceland again, and again for all the wrong reasons.

Now Iceland wants to show you that it can be more than an economic nuisance. It can be inspiring.

Earlier this year the Icelandic Tourist Board launched an initiative called Iceland Wants to Be Your Friend. Iceland got its own Facebook page, its own Twitter stream, and A Blog About Iceland. And rather than presenting the information as written by the Tourist Board, everything is written in first person. I started getting emails from Iceland itself, with headlines like “I’m Still Here” after the volcanic eruption. Iceland’s status updates rolled through my Facebook and Twitter streams. From tidbits of history and geography to messages of thanks and welcome to visitors, it seems Iceland always has something to say. “Some people say that me and Greenland should switch names. I do not think this is a good idea. I like my name.” And given the number of Twitter followers and Facebook fans Iceland immediately attracted, it seems people are listening.

Now there’s a new publicity push for Iceland, called Inspired by Iceland. With quirky videos that showcase the sweeping landscapes of Iceland, testimonial videos from people who have been “inspired by Iceland”, live webcams at locations around the country, and selections of Icelandic music, this site is…well, inspiring. They even got Yoko Ono and Viggo Mortenson to talk about how much they love Iceland! If you weren’t already in love with Iceland, you’ll be inspired to visit this magical country for the first time. And if you’ve already been, you may just be inspired to book your return trip right away. You can even create your own video or write your own tale of how you were inspired by Iceland.