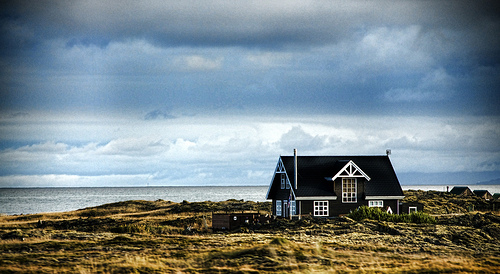 Autumn begins Iceland’s off-season, after the peak travel season of mid-June to late August. But that doesn’t mean it’s a bad time to visit. While you won’t see the Midnight Sun, temperatures will be lower, and some areas will no longer be accessible, there’s still plenty of reason to explore Iceland in the fall.

In September, the Northern Lights make their first appearance; in the beginning of the month you’ll still have some nice, sunny days with highs around 10°C (50°F) and lows around 5°C (40°F). October sees the most rain and temps begin to dip further, with averages ranging from 2.2-6.8°C (35-44°F). By November, winter has surely arrived, with temperatures ranging from 3.4 to -1.3°C (30-44°F) and snow beginning to blanket many areas.

The hours of sunlight each day also decrease in fall. In September the sun rises around 6:30am and sets around 7:30pm. By November sunrise has been delayed until 9:30am, while the sun sets again by about 4pm.

Though the weather isn’t as nice as it is in summer, luckily you can still do most of the same activities in fall that you can in warmer months. Go horseback riding, soak in the Blue Lagoon, visit waterfalls and glaciers and explore caves and black sand beaches. You can even snorkel (all year round) at the rift at Thingvellir National Park.

And the good news is that you’ll save money, not only on all these activities and your accommodation, but also on the flight over. While flights from the east coast of the US can be $800-$1000 (or more) in summer, as the fall creeps on, prices get lower. Flights to Iceland in September might range from $500-$600, while in November you can often score a package that includes flights and accommodations for under $450. Hotels and tour operators generally switch to off season prices by the first week in September so you’ll save even more.

>> Read more about things to do in Iceland

Packing for Iceland in fall isn’t much more challenging that summer, though there will be a bit of fluctuation depending on when in the fall you visit. In September you may be able to get away with a lighter jacket while by November you’ll want to pack a warm winter coat. No matter when you come, bank on layers, a good pair of shoes or boots for outdoor activity, and a hat, gloves, and scarf.

>> Read more on what to wear in Iceland in fall

There are a few festivals and events that take place in the autumn. In September, farmers round up their sheep and horses from the mountains in the Rettir, in which at many farms, guests are invited to participate. September also sees the Reykjavik Film Festival featuring films from around the world. And the most popular event for music lovers takes place in October, when the annual Iceland Airwaves Music Festival comes to town.

>> Read more on festivals and events in Iceland