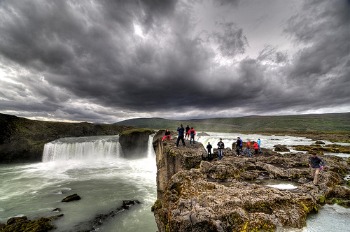 Goðafoss  (which means waterfall of the gods in Icelandic) is one of the most beautiful waterfalls in Iceland and one of the most popular sites of northern Iceland. It’s located about 45 minutes (31 miles) east of Akureyri and 45 minutes (33 miles) south of Husavik, just off the Ring Road. The waterfall isn’t as powerful as others in Iceland, but it appeals for the separate cascades that form a semicircle where the water plunges into the river below.

The waterfall is closely tied to Icelandic history, particularly to the conversion to Christianity in the year 1000. That year, Iceland’s Parliament was deciding between paganism or Christianity. Thorgeir Thorkelsson, the law Speaker of the Icelandic Parliament lived on a farm very close to the waterfall. The story goes that Thorgeirr, a pagan priest and chieftain, decided in favor of Christianity. He then threw the symbols of his pagan gods into the falls to show his conversion to Christianity and thus the falls became known as Goðafoss.

How to get there: From Akureyri, take road 1 east until road 842 and go right. From Husavik, take road 85 south to the Ring Road (road 1) and go left, then right on road 842. From Lake Myvatn, follow road 1 west, about 45 minutes until road 842. You’ll be able to see Goðafoss in the distance on the approach.

What to do: There’s no infrastructure at Goðafoss, just a single picnic table, a port-a-pottie, and a small parking lot. The main attraction is the falls, which you can walk to the very edge of – carefully.

Tips for visiting: The area around the mouth of the falls can be quite wet and if you really want to get up to the edge of the rock cliff, you’ll need to clamor over rocks and around large pools of water, especially when it has recently rained. Wear clothes you don’t mind getting wet or dirty; boots are a good footwear choice. The spray from the falls can also contribute to making you feel cold and wet so bring a warm or waterproof coat.

Most people only spend 20-30 minutes at the fall, which is enough time to get up close to the edge and take plenty of photos from several angles. Unless you want to have an extensive photo shoot or enjoy a picnic lunch, you really don’t need more time. There is no charge to visit the falls.