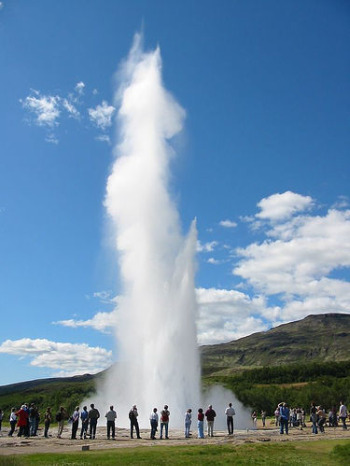 Geysir, located along the Golden Circle in southwest Iceland, is the geyser from which all geysers take their name. Only here’s the ironic thing – Geysir rarely erupts any more, so most visitors to Geysir are actually coming to see the nearby smaller geysir, Strokkur erupt.

Geysir was the first recorded geysir, and earliest records date its existence back to 1294, when an earthquake most likely caused the geyser to form. In the 1800’s, Geysir was dormant for several years until an earthquake reawakened it and it began shooting water into the air several times per day.

The highest recorded gush of water was 100 meters, though more often the sprays reached to about 60 meters high. These eruptions could last for up at an hour.

Over the next fifteen years, activity began to decline again until a ditch was dug, which helped stimulate the eruptions. By the late 1900’s, the only way to get Geysir to erupt was by adding soap, a practice that was short-lived due to obvious environmental concerns.

Luckily, smaller bubbling pots and the nearby Strokkur keep tourists coming to this area. Strokkur erupts reliable every 4-8 minutes, shooting scalding hot water into the air and spraying any tourists who happen to be standing too close.

At the Geysir site, you’ll find a hotel, welcome center and restaurant. Visitors can stay overnight at the hotel or in the campgrounds, dine, swim, golf, or rent horses or four-wheel quad bikes.

If you’re on a tight schedule though, allow about 30 minutes to wander around the area, check out the small hissing and spitting boiling pots, and to watch Strokkur erupt a few times.

Tour buses and private drivers will bring you to Geysir on a combined Golden Circle Tour, which usually lasts 6-8 hours. But you can easily visit Geysir on your own. It’s an easy, well-marked 120-km drive from Reykjavik and there is no admission fee.