Getting from Reykjavik to the Golden Circle 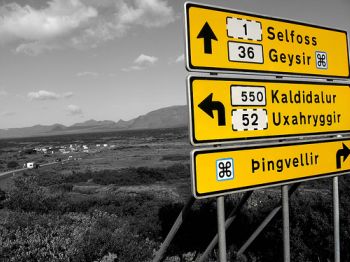 Iceland’s Golden Circle is a series of natural wonders located in the southwest of the country, outside of Reykjavik. An easy day trip from the city, the three attractions can all be visited in one day, and while you can ride along on a group tour or hire a private driver, the best way to take in these sights is to drive yourself. Here’s how.

From Reykjavik, take route 1 north, via Mosfellsbaer, to route 36 which runs through Thingvellir and around Lake Thingvallavatn. The drive is about 50kms, but allow about 2 hours to make the journey, as you’ll probably want to stop often for photos.  Allow about an hour to wander around Thingvellir, through the rift, and stop at the visitors center.

From Thingvellir, it’s less than 30 minutes to Geysir. From road 36, take road 365 to road 37, which then connects back to road 36. Other than the actual geysers, there’s not much to see and do at Geysir (unless you want to stop for lunch at the restaurant). You don’t need much more than 30-45 minutes before moving on Gulfoss.

Gullfoss is just another few kilometers from Geysir, up road 35. Allow at least an hour to walk down to the mouth of the waterfall and then back up (but be warned, in winter, the hike is quite treacherous).

Afterwards, you can retrace your route back home, which will take about 2-3 hours, or you can circle around to the south, taking route 35 from Geysir, to connect back to route 1.

The entire day will take you about 6-8 hours, depending on how much time you spend at each attraction, and how many stops you make.