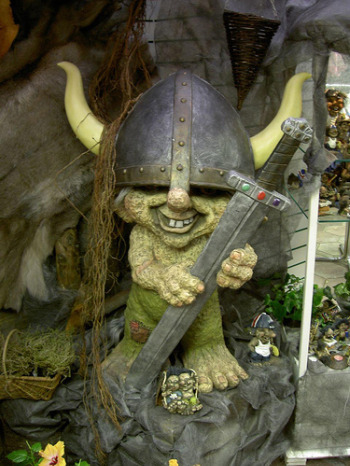 You may have heard the story that many people in Iceland believe in elves, called hudulfolk, or the “hidden people.” While not everyone believes, many at least aren’t willing to rule out their existence entirely. It may be a running joke among visitors that the Icelandic people believe in elves, but to some people, it’s no laughing matter.

In fact, elves have cost the Icelandic people a lot of money. If the elves are unhappy with a new construction project, that project will be moved. And pity the foolish person who tries to bother the elves. Once a large stone was supposed to be moved for a road, but when the equipment used to move it kept breaking down mysteriously, it was determined that it was an elf home and should be left alone. The road was moved instead.

For tourists, elf tours are often of interest and several companies do offer them. Though I’ve not taken one and I’ve only heard of disappointment from those who have. It seems the tour operators are only too willing to capitalize on the rumor that Icelanders believe in elves, without putting much real effort into the tours.

Of course, not everyone believes in the existence of elves, it just seems it’s a matter of pragmatism. While many don’t necessarily think elves are scampering about the countryside, they also feel as though they are in no position to say that elves definitely do not exist. One person that I talked to simply said “I believe just about anything is possible.”

And once you arrive in Iceland, see geysers spurting water into the air, see waterfalls in every direction, ride on an Icelandic horse, or walk in the rift between two pieces of the Earth’s crust, you might think anything is possible too.