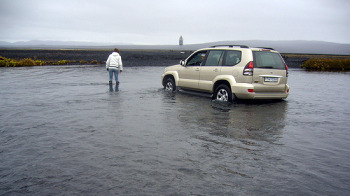 Driving in Iceland can be a daunting prospect. While most of the Ring Road is paved and in good condition, there are some gravel spots, and if you plan on getting off the main road (as you should) you’ll be faced with lots more gravel spots, blind corners, narrow bridges, animal hazards, flooded roads, potholes, and more. And that’s in summer. Despite that, it’s still pretty easy for tourists to drive themselves around the country, if they take the right precautions. Here’s what you need to know about driving in Iceland.

All European and US licences are valid in Iceland, but drivers must be 21 years old to rent a car, and 25 years old to rent a jeep. Seat belts for both front and back passengers are required, headlights must be on at all times (night and day) and cell phones can only be used with hands-free equipment. There are still penalties for driving under the influence, and many car rental agencies will not allow you to take a rental car on highland roads (you’ll face a large fine if you do, not to mention, you’ll be responsible for any damage to the car).

In all parts of Iceland, call “112” to reach Iceland Police, as well as ambulances and fire department. In the Reykjavik area, “1770” calls a doctor to medical emergencies.

Rules of the road

Cars drive on the right side of the road in Iceland. The general speed limit is 50 km/h in urban areas; 80 km/h on gravel roads and 90 km/h on hard surfaces. Watch out for animals on the side of the road. Drivers who kill or injure livestock may be responsible for paying damages to the owner. Highland roads in Iceland are usually narrow gravel roads, and most rivers are not bridged. On maps and roadsigns, they are indicated with an F before the road number, and most are suitable for jeeps only. Driving off marked roads and trails is illegal. 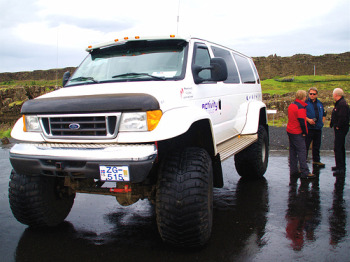 Driving in the highlands of Iceland’s interior presents a special challenge and requires a 4WD vehicle. If you are caught taking an unapproved car on these roads, you could be fined.

Be sure to allow extra time for your journey and make sure you have a full tank of gas. Roads in Iceland are clearly marked, but gravel roads, windy roads, narrow bridges, and unexpected hazards can make a trip take longer than expected. Outside of Reykjavik, petrol stations are few and far between. For a tutorial on driving in Iceland, check out this video.