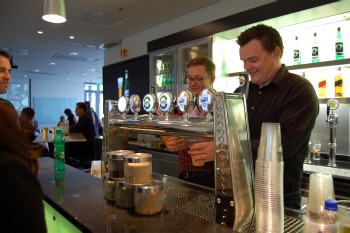 Even after my first trip to Iceland, I didn’t know much more about Icelandic beer than this: it’s good; and it was banned from 1915 to 1925 (along with all alcohol) and remained banned until March 1, 1989. On my second trip, I decided I needed to expand my knowledge of Icelandic beer, so I booked the Grayline “Taste the Saga” Tour, which takes visitors to Iceland’s oldest brewery, Ölgerðin. For €23.50, it seemed like a good deal: transport to and from the brewery from downtown Reykjavik, a one hour tour of the facilities, and the promise of a few beer samples. The tour far exceeded my expectations.

Upon arrival, we joined a group of 50-60 people who were already happily drinking pints of Egils Gull that the staff was pouring. Though the tour was conducted in English, we immediately noticed that we were in the minority. There were just four other Americans and a handful of German and Danish tourists; the rest of the crowd was Icelandic.

Once everyone arrived, our host, Husky, began telling us about drinking culture in Iceland. Interspersing historical facts with his own opinions and a healthy dose of humor, Husky kept us laughing while giving us some great insight into the culture and history in Iceland. For example, when beer was banned, Icelanders would mix lite (nonalcoholic) beer with brennivin or gin instead. The taste was pretty foul, but it provided an alcoholic beer substitute during the time of the ban. Interestingly enough, even during the ban, Ölgerðin continued to brew beer for export, so while Icelanders were choking down beer mixed with cheap booze, foreigners were enjoying the good stuff. 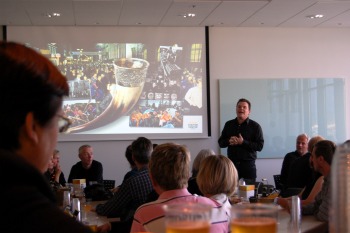 Now that beer is legal again, most of Ölgerðin’s brew stays in Iceland. Icelanders consume over 81 liters of per person anually. But beer isn’t the only thing Ölgerðin makes; the brewery also produced a variety of soft drinks, including Applesin (a fruity soda) and malt. Bland, a mix of Applesin and malt, was created in 1956, and soon became a popular drink at Christmastime. Now Icelanders drink over 16 liters of malt (mostly in the form of bland) each holiday season.

Once we learned about the history of beer in Iceland, and the story of Ölgerðin, we donned hair nets and went out for a short tour of the brewing facilities. Here we learned more about how beer is made, and were told about the green efforts of Ölgerðin, which boasts that it is among the most eco-friendly breweries in the world. Husky informed us that everything that comes into the brewery is used, or in the case of the spent grain and hops, recycled.

After the tour, we headed back to the bar room for more tasting. Between the first pints of Egils Gull, and a few refills, and then samples of mead, lite beer mixed with alcohol, and brennivin, we were all feeling quite convivial. We then samples the nonalcoholic Applesin, Malt, and bland mix, and then capped off the tour with another pint or two of the frothy golden beer. By the time the 90-minute experience was over, I think I had a total of three pints and a shot of brennivin, which, in any bar in Reykjavik, would have equaled the cost of the entire tour.

But that wasn’t all. As we left, Husky passed out coupons good for two beers for 1000 ISK (about $9 US, and quite a deal since most beers are 700-800 each in a bar), which we could redeem at any of five bars in Reykjavik. Not only was the tour informative and entertaining, but it was also certainly worth its cost in beer!

The Taste the Saga tour is offered Friday and Saturday nights at 6pm and lasts approximately 90 minutes. Cost is €23.50 for adults. Children under 11 receive a 50% discount and are allowed to sample the non-alcoholic beverages.