871, The Settlement Museum in Reykjavik 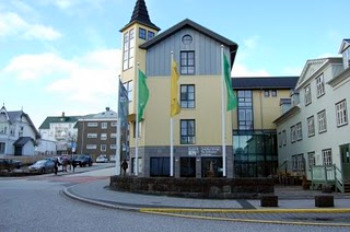 In 2001, as construction began on a new building in the old city center of Reykjavik, an exciting discovery was made. Buried underground and nearly perfectly preserved was an ancient Viking longhouse, a traditional dwelling. The city excavated it, preserved it, and turned it into a museum.

If you only visit one museum in Iceland, the 871 +/- 2 Settlement Exhibition should be the one. It’s informative, educational, interactive, and unique. The site is of great pride and historical importance to the Icelandic people, and the museum gives a comprehensive overview of Viking history and the early settlement of Iceland.

The focal point of the museum is the excavated longhouse, which archaeologists believe housed a Viking family (and their livestock in one corner of the building) from 930 to 1000 AD. The house was made of turf and stone and contains the largest fireplaces excavated in Iceland.

Throughout the museum, you’ll find interactive exhibits. Onto the walls are projected images of life during the time, including what the landscape of early Reykjavik looked like. Visitors can see a virtual reconstruction of the longhouse in 3D and learn how the archaeologists have interpreted what they found there. Other displays show artifacts excavated both from the longhouse and from the surrounding area and exhibits explain how these tools and items were used by the Viking to cope with the harsh conditions of Iceland.

Close to the longhouse, another important discovery was found. A portion of a wall, covered with a layer of volcanic ash that archaeologists have dated at the 871, is the oldest relic ever found in Iceland.

Most visitors will want to devote about an hour to the museum. It is located at 16 Aðalstræti in the city center. The museum is open daily from 9am to 8pm and pricing information can be found here.